What if your ideas go viral and you don’t get credit for it?


​As you become more effective and successful with your work, one of the risks is that others might copy you. This is most frequently done in online content: one of your pieces goes viral and then others reuse it, but don’t give you credit.

Should you be concerned that it might happen? Do you need to constantly monitor and hunt down the copycats? Some people do. For me, it would be too much stress.

Instead, I recommend preventive measures.
The more places you publish the idea, the easier it will be for people to find you as the source of that idea.

Here’s what I recommend:

Make a Twitter thread of your idea, so that there’s an obvious timestamp to demonstrate when the content first appeared online. As an example, this blog post began with this twitter thread – https://twitter.com/GeorgeKao/status/1436134931776749581 – which was months before I wrote this blog post that you’re reading now.

Make a YouTube video of you speaking the ideas. This is not only effective as a time capsule, but will also help your SEO, since Google often features Youtube videos in its search results. (Be sure to keep your video either Public or Unlisted. But if you later make an Unlisted video Public it might reset the time stamp.)

Post it on Medium.com and as a LinkedIn Article, as both of these are helpful for Google SEO. Example of this article:  If the idea gets a great response with any of the above efforts, consider also publishing it as a book. For example, Amazon Kindle books can be really short: Amazon Kindle 15-minute reads

Then if the idea goes bananas, someone will eventually research the origin and find you.

That's all I recommend that we do. Let go of forcing anyone to give you credit, and focus instead on creating and distributing.

Years ago, I came across an article that I loved. I reached out and asked the author if I could repost the article in its entirety, with full credit to him. To my surprise, he quickly responded "no way". This kind of protectionist thinking is outdated & unnecessary. I could’ve gotten him hundreds more new readers. Although he was a personal development “expert”, he was apparently not in an abundant mindset at the time.

I get it. I used to think I had to fiercely protect “my” ideas too.

Over time I’ve learned that, by allowing others to repost / republish my content, I make new friends, gain new readers, and make more positive impact in the world with my work.

This is why I've uncopyrighted all my free content. Reuse, remix, to your heart's content! It's all good :)
​
However, to prevent someone else saying "Hey, you stole my idea!" I use Twitter as a place to store potential blog post ideas. See it here: George Kao Twitter. I don't care if someone else takes my ideas... but I don't want to be falsely accused of stealing.

Bottom line – if your creations go viral and get repurposed, it proves that you have the ability of creating something that touches people deeply. Let it simply encourage you to create and serve more.
​ 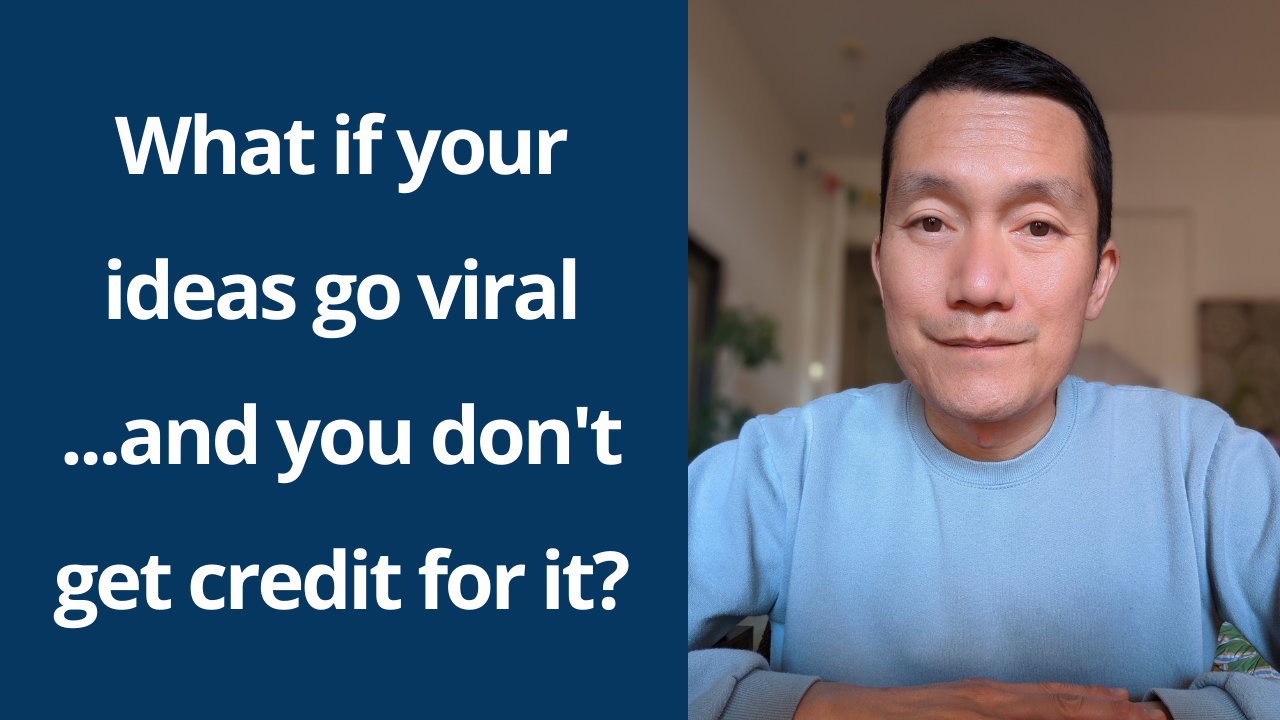