Focus on systems everyday, not goals

​In entrepreneurship, we often encounter a fixation on big goals and dramatic results.

When that is the constant focus, two things happen:
1. Your subconscious keeps telling you—daily—that you aren't there... that you aren't yet "enough".

Desire becomes a contract we make with ourselves to be unhappy until something specific happens. (paraphrase of Naval’s tweet)

The fixation on a big numeric goal (such as “6 figure income” or “1 million followers”) creates an underlying layer of unhappiness or anxiety with one’s current life.

2. The more you focus on the specifics of the goal, the more you become attached to how it must turn out.

If the end result doesn't happen in the way you visualized—or in the timeline you expected—it can deal a blow to your self-identity, and erode your sense of self-empowerment.

I prefer to look at goals in a different, perhaps healthier way:

I focus on my systems—my daily processes—rather than my goals. ​

I'm not saying to get rid of goals.

I, too, have a vision for my future life and specific milestones I aim for.

Yet I hold loosely to those future numbers and milestones. I think of them as potentials rather than as a rigid definition of success.

I use future vision to help me design a daily system that will move me toward the vision... that turns possibilities into probabilities.

The farther out  the goal, the less we can accurately predict its success.

When it comes to whether I will achieve my milestones, I know that there are too many uncontrollable factors: personal circumstances I can’t foresee, technological and market changes that will surprise everyone, and other future revelations that may require a big change in direction.

So let's be careful not to get fixated on a future goal that we made up.

Instead, let's create a system for action that makes the goal more likely.

If the system feels daunting to you, then specify smaller, more doable steps, in order to prevent procrastination. Examples:

Doable steps:
If you apply your system consistently, you’ll find clarity on how to make the system better, thereby increasing the probability of reaching your goal!

Creating the system—the process of daily or weekly actions—is the first major step.
We can then take the next step to make it more meaningful—we can elevate our purpose for that system: to grow our skills and capacity.

In other words, we are now reframing the true reason for the system from “reaching the goal” to “improving ourselves.”

Why? Because the only “goal” that truly matters is our growth.

As long as you are developing your abilities and character, you are becoming more valuable to society. And if you keep doing that, then Life will become progressively more joyful and meaningful for you.

Any goal instantly becomes more purposeful when you connect it to the deeper goal of growing yourself.

Interestingly, when we focus on our systems—rather than our goals—we also tend to experience better results.

Here's a wonderful little story from the book The Practicing Mind:

"I once read an interview with a coach for the U.S. Olympic archery team. He commented that the biggest problem he faced in coaching the American team was that they were fixated on their scores, or the result of their shots.

It was as if they were drawing the bow and releasing the arrow only to hit the bull’s-eye and earn a good score.

This was in contrast to the Asian teams, who, having grown up in different cultures, were consumed in the process of properly executing the technique that led up to releasing the shot. Where the arrow hit the target was almost unimportant compared to the motion of drawing the bow correctly and releasing the shot.

They viewed the result with an almost detached indifference. For them, the desired goal was a natural result of prioritizing the proper technique of drawing the bow. They operated in a completely different paradigm, and because of it, they were very difficult to beat.... The minds of the Asian archers were quiet, uncomplicated, and free from mental turmoil.

The irony was that, when compared to the results-oriented Americans, the Asians were the ones who were winning. Now, U.S. sports psychologists are teaching our athletes to think along similar lines.”

I'll end this article with a deep truth I believe for everyone:

Somehow, you will be taken care of.

In some mysterious way, everything will turn out beautifully for you.

Therefore, do not be afraid of whether you reach your concrete goals.

Focus instead on your systems.

Use those systems everyday to grow yourself.

Then, the journey of life becomes purposeful and more joyful.

And you may even travel well beyond your original goals.
​
(Originally published in 2017, updated in 2021.) 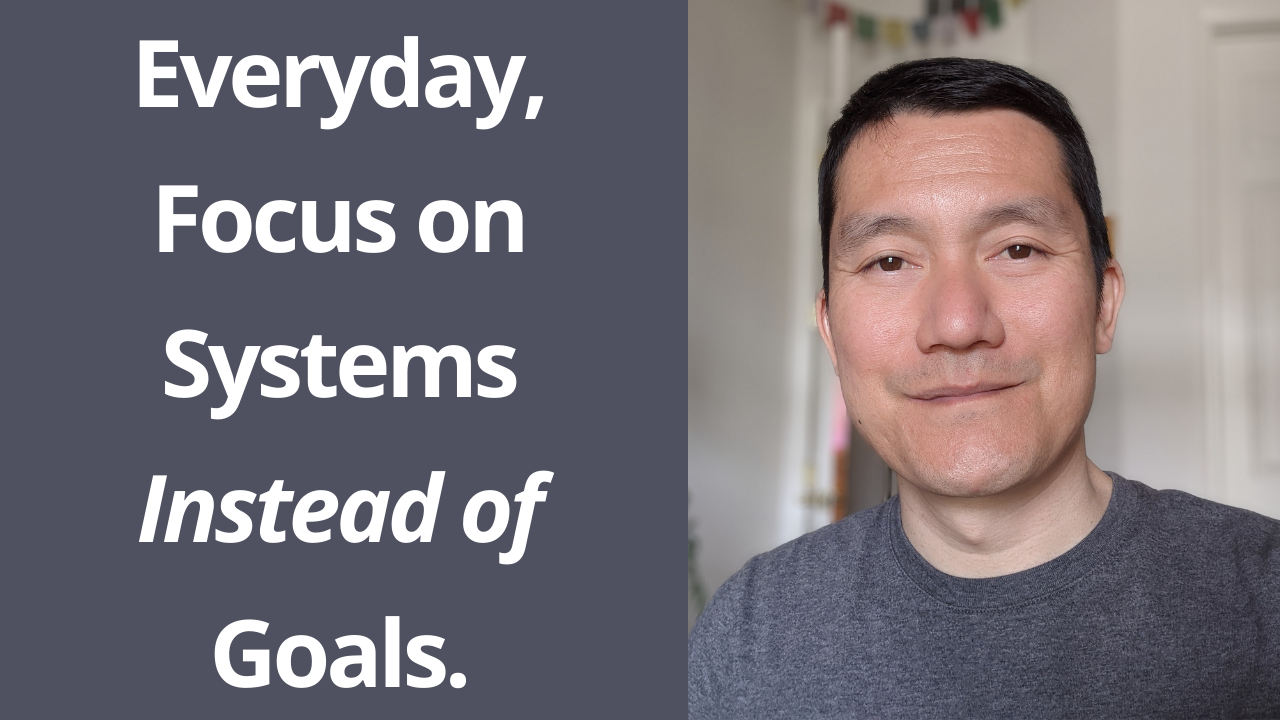